Now that Newborn Screening (NBS) has been recommended, we turn our focus to the Australian states and territories, as this is where NBS gains funding. Each state has to allocate in their budget to pay for testing.

Some states are actively looking at funding NBS, whilst in other states it’s not even on their radar for funding, so we together as a team need to campaign as a team to highlight the need for NBS in each state.

As we have previously stated, a person’s postcode shouldn’t determine if they get screened at birth for SMA.

Come and join us for an important update and next steps in our advocacy and how you can get involved the become a NBS Ambassador for SMA in your state.

Click here to register in advance for the our interactive Zoom meeting.

After registering, you will receive a confirmation email containing information about joining the meeting. 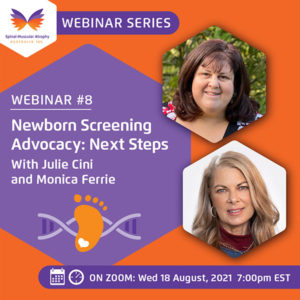